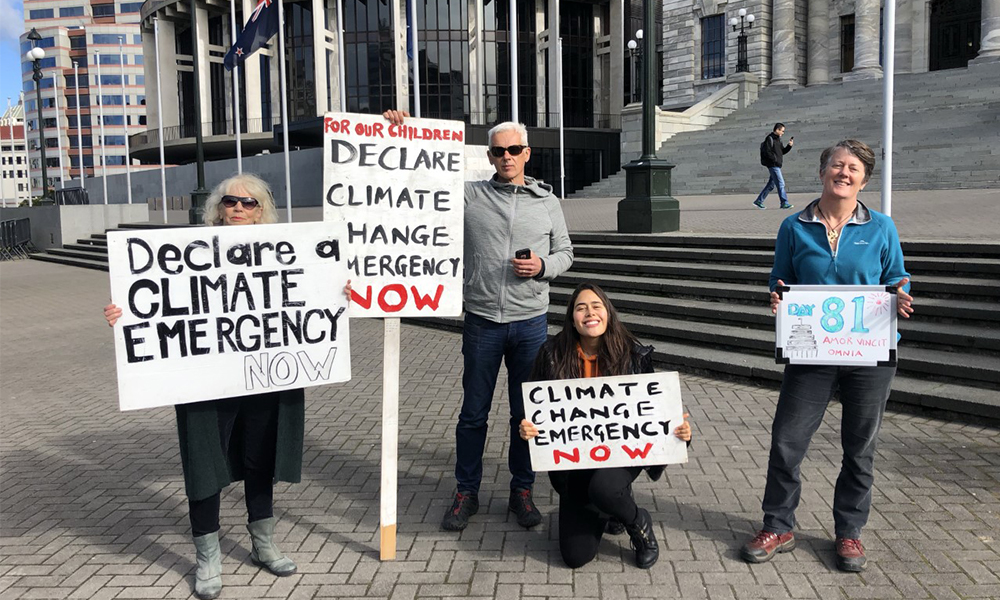 Aotearoa’s activism front is ripe within Massey students and youth in 2019.

Protests this year include the abortion march, protest on sacred land at Ihumātao and in this case protest regarding the climate change emergency.

Youth are not the only ones concerned with climate change as father of five, Ollie Langridge has spent the last three months on the lawn at Parliament.

Langridge is protesting for a climate change emergency to be declared to protect the future of his children and future New Zealand generations.

He has stood on the Parliament lawn through the severe Wellington weather conditions, of which all Wellingtonians are familiar with.

Green MP Chloe Swarbrick heard Ollie’s plea and took it to the House of Representatives on the 31st of July.

Swarbrick said, “His simple request is that we demand climate emergency now.”

Swarbrick brought his protest signs into the House and said, “If we do not act, this planet will continue to exist, but we won’t.”

Massive went and spoke to Ollie whilst he was protesting on Parliament.

He said that Swarbrick adopted his protest into her speech to show how important climate change is to New Zealand and its younger generations.

“On day 77, Chloe came out for a chat and said she wanted to get our signs into Parliament, she then designed a speech around this protest as a sort of spine to her argument.

It was really amazing to see our signs taken into Parliament which is almost the highest point in the land. I don’t know if that’s ever been done before.”

Despite the fact that Ollie has a family, five children and runs a business remotely, he is still highly dedicated to his ongoing protest and the climate change movement. His eldest child is 23 and currently resides in Berlin.

Whilst on his travels his son met like minded people and discussed climate change. They asked him if he knew of the protestor in Wellington, New Zealand; he said he did and that the man protesting was his father.

When Massive asked Langridge about the impact his protest has had on young New Zealanders, he said it’s above party politics.

“Look I’m an old guy, I don’t consider myself to be but I am 55, I’m proud to be standing up for my kids because it’s the best thing I can do for them. I think young people need to get involved in this as much as possible.

For me this is not about politics, it’s for our children, this is why I do this. Not just for my children, but for yours and anybody else’s and our future generations.”

Langridge plans to stay on the lawn of Parliament until a climate change emergency is declared in New Zealand as he and many others believe that the issue is central to protecting New Zealand’s future generations.

Langridge believes in our youth and said, “young people, can drive change”.