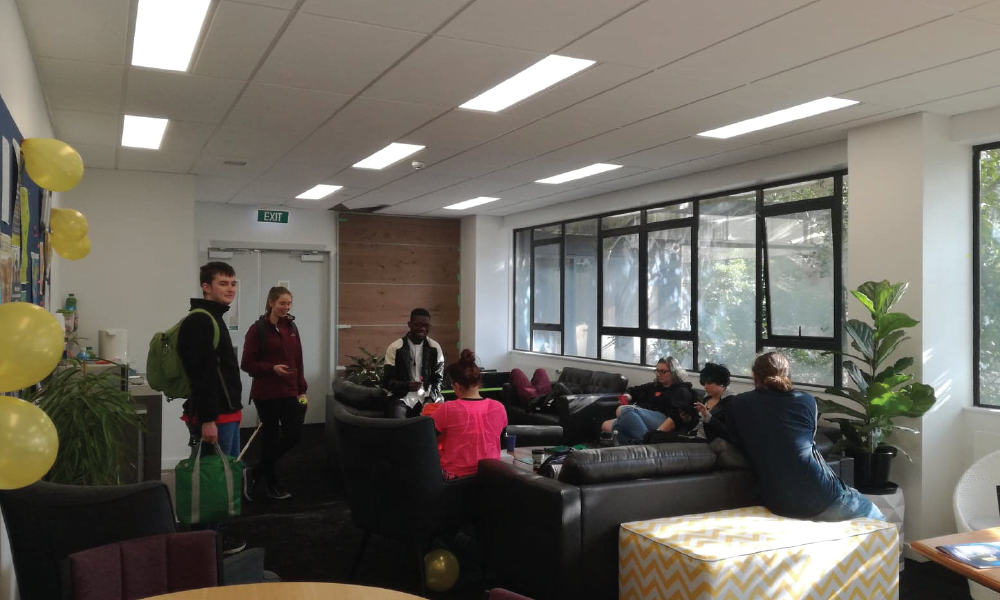 After months of construction on the ground floor level of Massey Manawatu’s Social Sciences Tower, students are finally feeling the benefits.

On Monday July 16 the new and improved BASE+ common room opened its doors.

Now instead of taking a lift or trekking up five flights of stairs to get to the old common room, students can breeze in through the newly-installed doors on the ground floor.

Everything students loved about the old space has been reinstated in the new one, including a bigger ball pit and a large table for studying in pride of place outside the BASE+ staff members’ new office.

There’s a brand-new kitchenette, bean bags and couches so students can relax or work as they please.

Professor Richard Shaw from the BA program was present at the opening, as well as the Pro Vice Chancellor of the College of Humanities and Social Sciences, Chris Gallavin.

BASE+ staff member Tali Lavini says it was good to see new faces at the opening.

“We’ve had students coming in and finding out about what BASE+ does for the first time, it’s been a success so far,” he says.

The space has been under construction for around six or seven months.

Staff member Heather Aguilar says the planning has been in place for over two years.

“The previous space was always going to be temporary, we hope this one will be permanent.”

The opening was celebrated with an all-day breakfast on the first day of semester. The space will be easier to access compared to the previous common room, which was on the fifth floor of the Social Sciences tower.

Student Simon Kikhounga says, “it’s great – it’s so nice to have somewhere to chill and study.”

The new space lets in a lot more natural light, with a view of the greenery outside.

“It’s nice to be able to see outside while you’re studying, you don’t feel enclosed,” says student Monique Burger.

Aguilar says BASE+ is getting a good reputation as an informal learning space, and the staff hope it will keep improving.