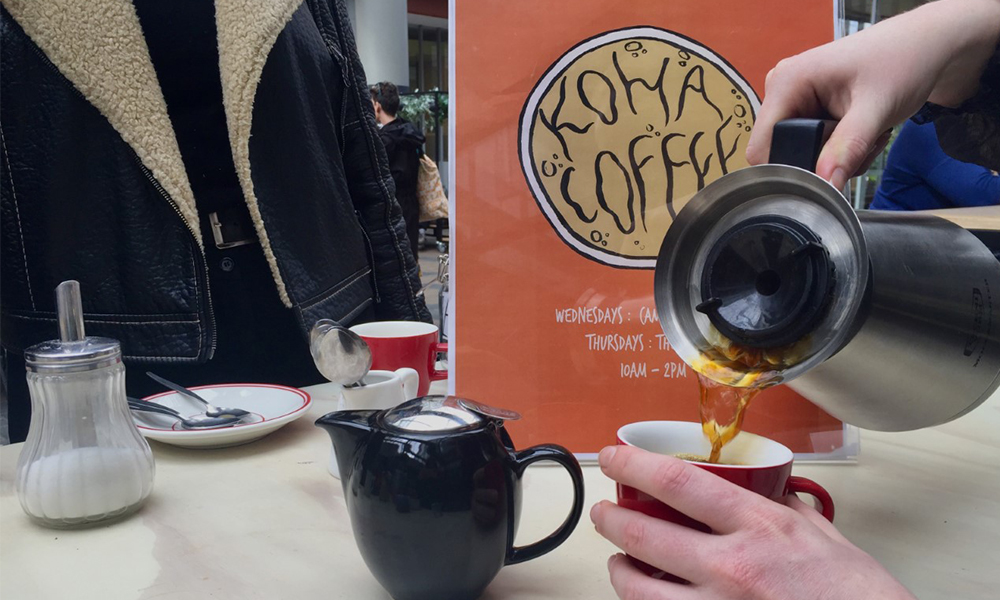 A Massey University club centering around affordable coffee is helping the student community thrive at the Wellington campus.

The club, named Koha Coffee, serves filter coffee and tea for free or a donation. Running in student spaces twice a week, it provides a space on campus for students to connect.

Koha Coffee helped club member Esther MacDowall, who has been involved for close to three years, settle into university life.

“It’s a classic uni problem that people feel disconnected...you move to a new city, and building a community’s really hard,” she said.

“It offers that space for you to step outside yourself and your own world.”

“At the heart of Koha, it’s not really about what benefits you, it’s about how much you can help other people, and I think that’s what’s really special about it,” she added.

Koha Coffee is also supported by Wellington brand Peoples Coffee, which donates 500 grams of coffee beans to the club each fortnight.

The sponsorship is wholeheartedly supported by business development manager Mariah Whittaker, who as a former Massey University student, appreciates the value of community throughout years of study.

A nocturnal Fashion Design student, she recalled, “We were always there until the security guard kicked us out... I loved it, and I met my best friends for life there.”

Whittaker acknowledged the similarities between Koha Coffee and the many other communities attached to Peoples Coffee.

Their Constable Street café works as a meeting space for a range of different cultural groups, including the local Muslim community.

They also sponsor local organisations and events such as The Sustainability Trust and Go By Bike Day, and have run barista courses at Arotaha Women’s Prison, passing on skills to women that may otherwise not be employable.

“It’s strange that all these communities can come together over a cup of coffee. I find that so beautiful,” she said.

Koha Coffee runs from 10am to 2pm every Wednesday and Thursday at the Wellington Campus, in Co Lab on Wednesdays, and The Lounge on Thursdays. Ask a team member about getting involved.