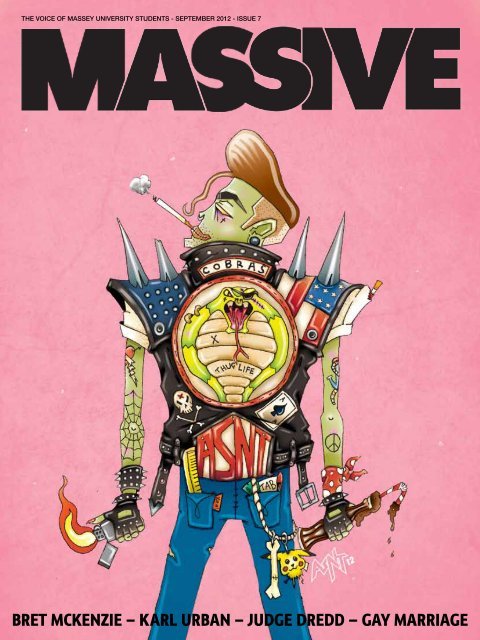 In Memory of Cameron Cornelius

A vital piece of Massive's history was lost late last year when designer Cameron Cornelius, the graphic designer and artist who named the publication,  passed away after a battle with a rare illness.  This is a small tribute to a talented designer, artist and human being.

"The magazine can be whatever it wants, so long as it's cool," Cam had said around 2011 as the bones of this new student magazine were being put together over many late nights.

"There is a lot at Massey that the magazines do not get to show off. Like the arts, creativity and talent. It's Massive."

He was right. And the name stuck.  Suddenly this weird resistance movement to fight voluntary student membership-inspired cutbacks by expanding instead of retreating had its name.

When we needed a logo, like yesterday, he made one. Oakland Raiders font after an NFL team he liked. The time pressure added the unintentional, but kept-for-humour, emphasis on the "Ass" of the masthead.

His motto of the day was "All Style, No Talent" but he always did sell himself short. Happy to let others take the limelight.

Outside of his graphic design talent was his personable talent to get the best out of someone or the best out of their ideas. And deliver sharp-witted jabs whenever needed.

Most of the innovations that showcase art, and not just writing, stemmed from this passion.  He would try and pair artists up with writers to illustrate works. After Magneto Magazine, Wellington's precursor to Massive, did some famous, street-artist-alumni a solid favour, it was his idea to get them to do the cover art which led to the infamous "White Cover" from BMD.

This led to some competition in the street scene to land a cover.

Again, his advice was:  "Do whatever you want. So long as it's cool."

As the year wrapped up he talked about wanting to get work working for Warhammer having been a fan of the art style in the hobby. Often he talked about setting up a Necromunda or Mordheim game between the Massive Magazine desks when we had downtime.

Unfortunately, there was never time. But he did realise his employment dreams and land the job.  I was happy for him, and not surprised he found success.

In 2019 he returned to New Zealand ready to take on a new challenge at Weta Workshop. We can only wonder what works of arts he would have given life to during is time there.

Cam, thank you for all your humour, style and talent when we were putting this Massive beast together and keeping everyone creative. You had a knack of getting the best out of everyone and anything. You never sought attention for your work and endeavours, but I hope you will forgive this one piece of publicity and praise for the work you did and the creativity you inspire.

Massive would not have existed without your input and it was all the better for knowing you. Like everyone you met.