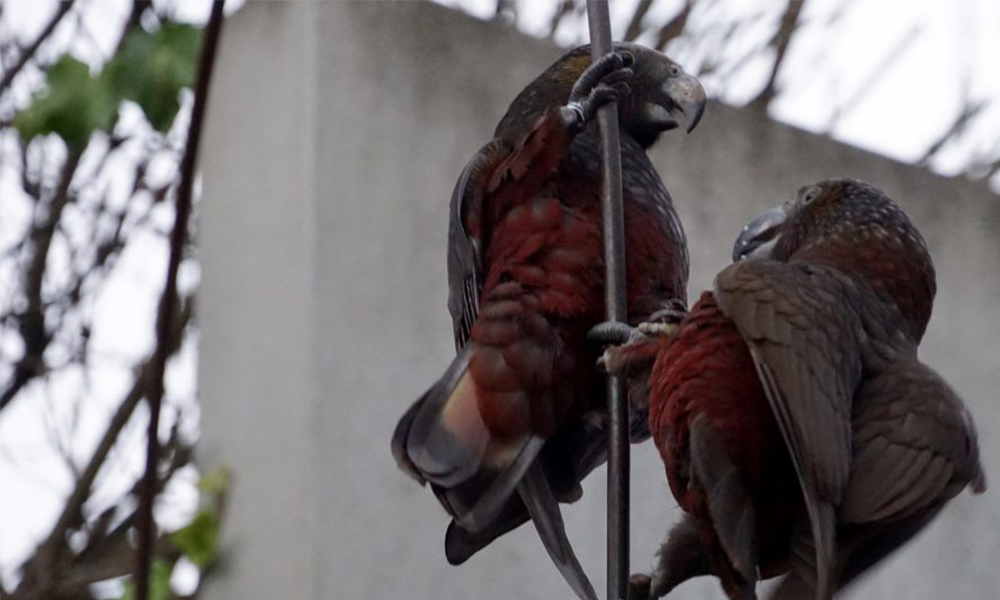 Heads up! Kākā birds with full tummies and too much time on their talons are posing an overhead hazard to Wellington’s bush walkers.

When Kākā got an easy meal from the public they had spare time to get up to mischief, she said.

Shanahan recommended the public did not feed the native parrots, which are estimated to number about 350 in the Wellington region.

On Monday afternoon, over a 20 minute period, one mischievous Kākā was observed by a bush walker to strip away five metres of bark from a Pine tree on Mount Victoria.

Some of the bark pieces were as large as a man’s torso, and fell over ten metres landing next to a walkway below.

Wellington City Council open space and parks manager Myfanwy Emeny, said the pieces of bark that fell from trees as a result of bark stripping by Kākā were usually only the size of a finger and did not pose a hazard for the public.

Northern Hemisphere trees, such as pines, had not evolved to deal with the damage caused by the cheeky native parrots, and the birds’ activities could lead to a decline in these trees in the capital.

Emeny said Kākā had caused damage to pines on Mt Victoria but, on a positive note, their destructive activities were hastening the current efforts to restore the forest to natives.

To date, close to 20,000 native trees have been planted throughout Wellington’s Town Belt, a combined effort by the council, Rotary Club of Wellington and Conservation Volunteers New Zealand.

She said council was proud the threatened native bird species had returned to New Zealand’s forests and were living in the heart of the capital city.

“Eventually Kākā will form a part of the native ecosystem on Mt Victoria, which includes pollination and spreading the seed of native tree species.”