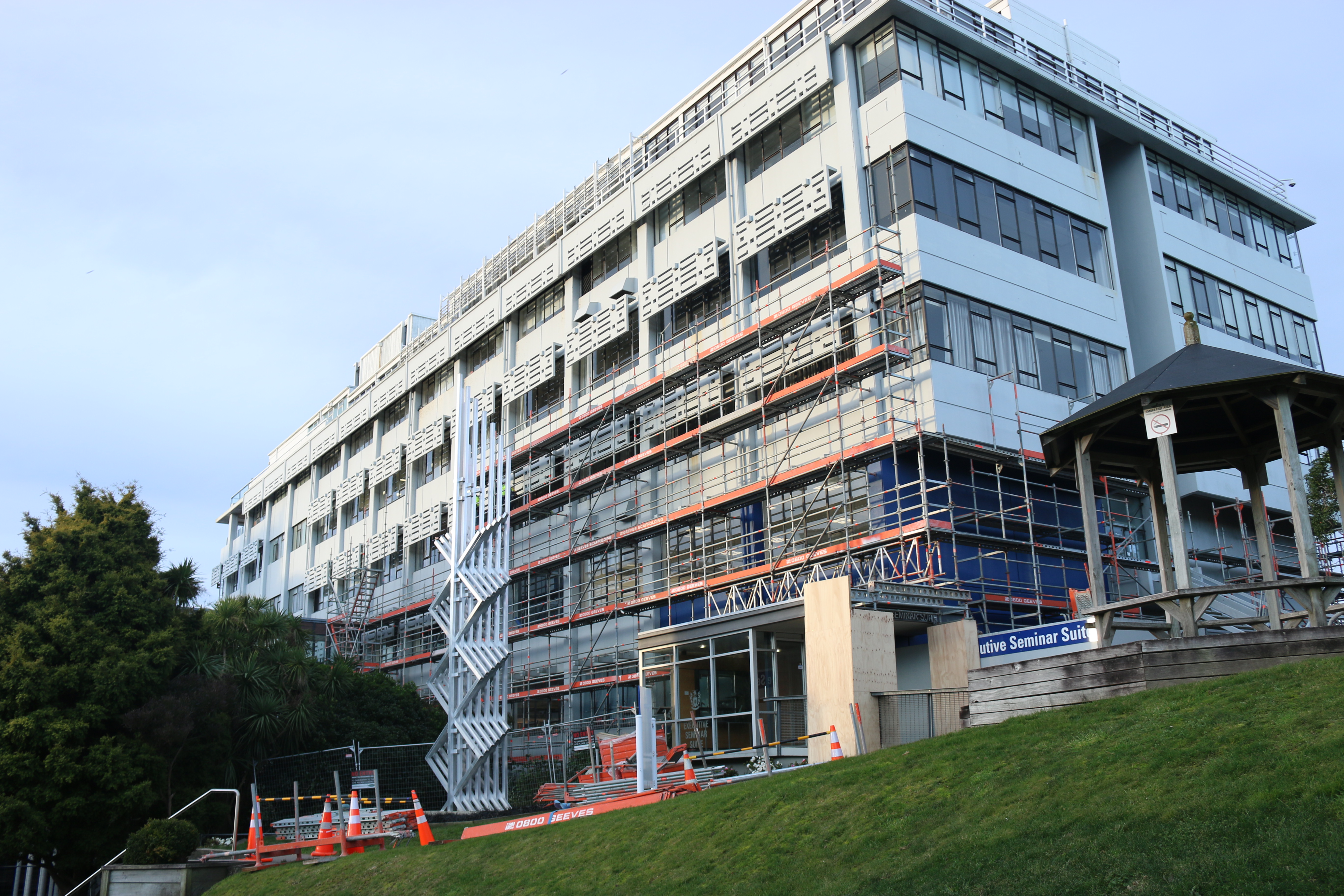 Classes have been disrupted and students and lecturers left frustrated by the noisy works that are rattling Massey’s Wellington campus.

Loud drilling and banging sounds have been heard in class rooms, lecture theatres and the library as contractors erect scaffolding and cut off the sunshades with electric saws.

Oliver Gaskell, a postgraduate student, says several of his classes had been disrupted by the noise.

“In one class it was so loud that you couldn’t hear the lecturer speak so it really interrupted the flow of the class and meant that it pretty much had to stop. It makes it quite hard to concentrate for students and staff so it’s pretty inconvenient.”

Rachel Moore, a communications student, says her class had to leave the room because of the noise.

“We had to take a break after 20 minutes of the three-hour class because they were drilling into concrete for 15 minutes straight,” she says. "It was really loud, the lecturer couldn’t talk over it.”

Moore says she thinks Massey University should have notified students about the works.

“Even just an email warning or something. The lecturer knew about it on the first day, but they wouldn’t tell her exactly when and where.”

Other students have complained about blocked access points between different buildings.

Carpark A has been occupied by a crane winching the sawn-off sunshades away. The carpark will be blocked for the duration of the works.

One student says she has had to switch to distance learning because the carpark was no longer available, and she couldn’t find anywhere else to park her car.

The library was offering students ear plugs, so they could study amidst the noise.

Catherine Strong, a Senior Lecturer on Massey’s Wellington campus, says classes will be moved if necessary, but she says this isn’t always practical.

“They said if it gets unbearable then they will try to shift classes, but that’s pretty impossible after you’ve already started the class. It’s not acceptable really."

“We [staff] were only notified the week before. They let us know there was going to be some work, at that stage it was indicated that it may have some disruption, certainly nothing like I experienced the first week of it.

“I’m appalled, absolutely appalled at the timing of this. I’ve been told that they’ve known for years and years that these sunshades were a seismic problem. Now why they couldn’t have scheduled it during a break, during the summer or at least at a less crucial time for the education process. It’s bemusing and disappointing.”

Communications Director for Massey University, James Gardiner, says the sunshades are a seismic risk so work needed to be done immediately and couldn’t wait until the summer months.

Gardiner says the university became aware in April that the sunshades either needed to be strengthened or removed.

“It was a case of getting on and doing the work to keep people safe. The noise and disruption is regretted,” Gardiner says.

“We are working with all the heads of each business unit and academics in Block 5 and surrounding areas to keep them informed of the plan and health and safety issues,” he says.

“If noise is a factor we are able to work with the staff and the contractor to either relocate the class or defer certain work for a period, and staff know how to raise this.”

The removal works are expected to continue until the end of October, with the exception of Open Day and exams.