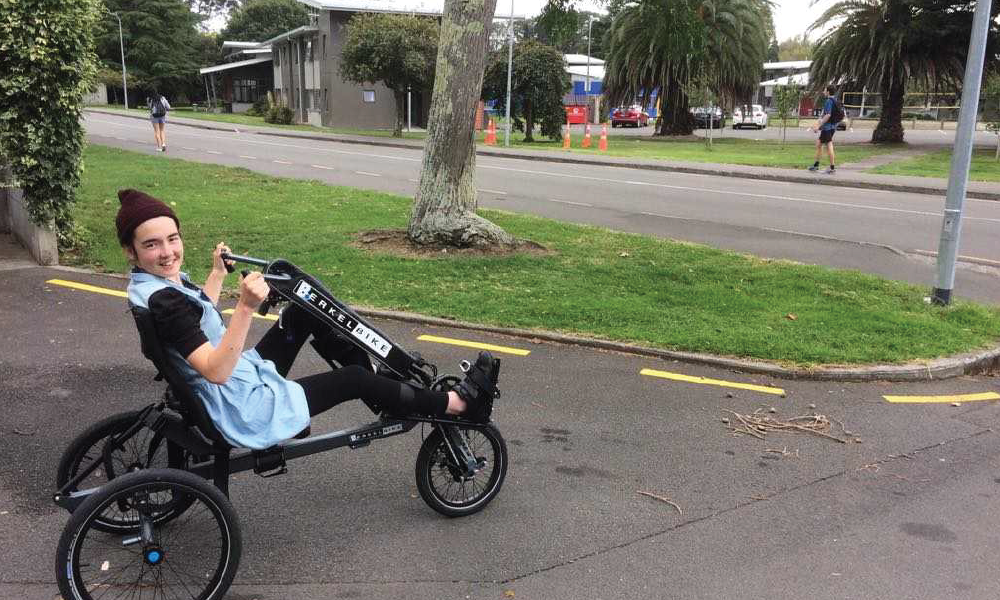 Bike could steer student toward independence

Bethany Wilson says it was almost by accident that she came across a bike that could help her walk again.

Now, six weeks after hearing about it and two-and-a-half weeks after setting up a Givealittle page to raise money for the bike, the 20-year-old is over halfway to her target of $11,380.

Wilson has Friedreich’s ataxia, a degenerative condition that means moving around gets more difficult as time goes by.

She is in her third year of a Bachelor of Science at Massey Manawatū, majoring in maths with an economics minor. She aims to be a maths teacher in the future.

“I walk a lot less than I used to, walking isn’t giving me enough exercise,” says Wilson, who needs the help of a support person to get around campus.

The special bike – a BerkelBike - has hand pedals as well as foot pedals, meaning that it gives all the limbs a workout.

Wilson got the chance to test the bike out for a free trial six weeks ago, and after feeling the benefits, decided to have a go at raising the money to buy her own.

“I use my arms and legs to move [the bike], so it’ll keep my body moving for longer,” she says.

“I’d never heard of someone using a bike like this before,” says Wilson. “I’d seen some people using hand bikes but not ones with legs as well.”

The bike will need to be shipped over from Germany and with more than $7000 raised so far through her Givealittle page, Wilson is well on her way.

“It’ll give me more independence, I can get on and off myself, so I can get up and go whenever I want.

“It’ won’t be easy to start with. It’s good though, I’ve been up the Massey hill several times. This campus is generally pretty good, I can get to all my classes fairly easily.”

“I’ve had lots of support from friends and other students interested in spreading the word,” said Wilson.

“The Givealittle page has only been up for two-and-a-half weeks, it’s been really amazing, I thought it’d take ages to raise that much money. But the sooner I raise the amount, the sooner I can start.”

If you want to donate, head to the Bike for Bethany Givealittle page.