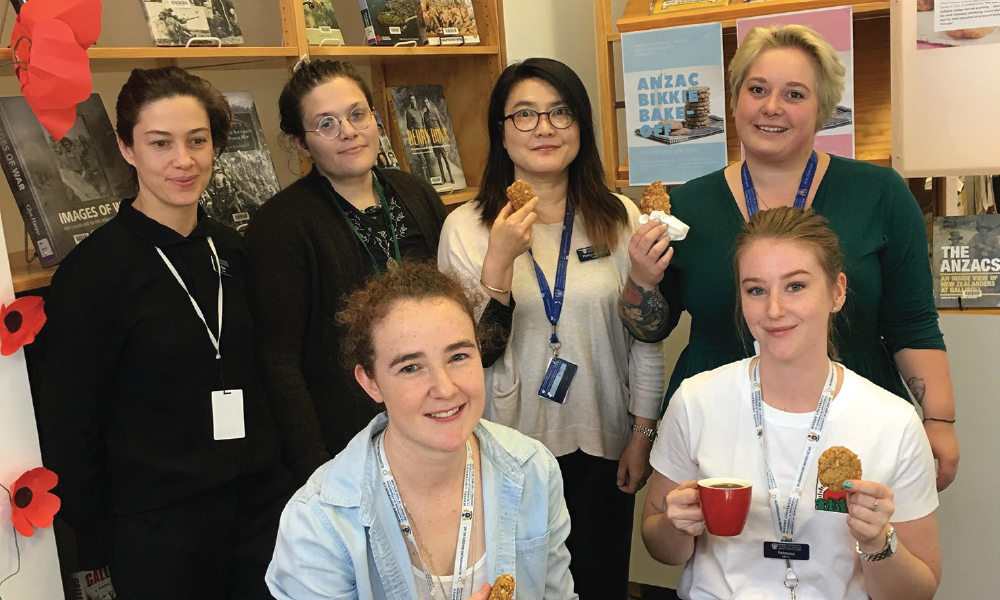 Anzac Day was celebrated with some delectable home baking and a hot cuppa on Massey’s Wellington campus this year.

Among the 10 entries were the Anzac-not-a-biscuit and Sergeant Major Chanui. One entrant even created biscuits made from an original 1914 recipe and another batch with a modern-day twist.

Anzac biscuits were shipped to soldiers during the war and were originally made from a simple mixture including flour, oats and golden syrup. Nowadays recipes can include desiccated coconut or even chocolate.

Hyekyung Chun Client Services Manager and part of the Lending and Document Supply Team at the Massey Wellington library says the competition started simply as a book display idea.

“We started by collecting Anzac biscuit tins and we sent an email out to other libraries, but no one replied.

“We realised there are lots of sorts of Anzac biscuits, so we thought we would bake some and then the idea got bigger and bigger.”

For the competition Chun created Anzac biscuits from a recipe from 1919 which she found in the St Andrew’s Cookery Book.

She says library staff, staff from the Centre of Teaching and Learning and the School of Journalism, Communication and Marketing were among those to enter.

The Koha Coffee club were also on hand to dish out hot beverages to staff and students with a sweet tooth who were kept busy sampling biscuits.

“It’s a little bit different but I think it could be a good thing for other campuses to try out as well,” says Chun.