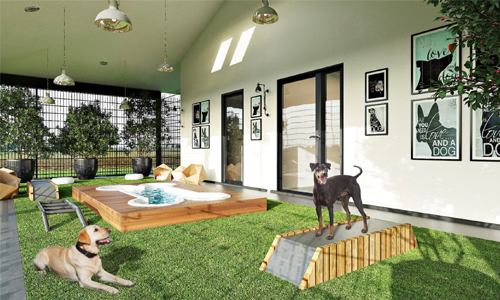 Pet Refuge aims to provide a safe space for family pets from across New Zealand to reside, giving their owners time to get out of abusive relationships and begin a new life, free of violence.

Women’s Refuge surveyed women who have had their pets abused or threatened – 23% of these women revealed that their partner had killed an animal while 53% said they delayed leaving the relationship out of fear for an animal’s safety.

“When I heard that animals were used as a means of control and part of family violence and that often women would stay in relationships to protect their pets because they had nowhere to go, I thought ‘we need a solution to this’,” Chapman says.

The shelter, which is due for completion in 2020, will be able to house up to 24 dogs, 35 cats and 30 small animals at any one time. The initiative is also working on building a network of kennels and catteries across the country in case of overflow.

The Pet Refuge team have been working closely with the RSPCA in New South Wales, who have had a similar program that has been running for 15 years.  The New Zealand program will be modelled on their systems and processes but tailored to New Zealand conditions.

As well as common house pets, Pet Refuge will take in larger farm animals such as horses, at a range of safe farms around NZ.

“We’ve got to make sure that we can help women and children who live rurally also, that’s really important,” says Chapman.

Pets in the RSPCA New South Wales and other overseas programs stay an average of three to four months, but Chapman says that Pet Refuge will work with families as closely as possible to provide a safe space for as long as it’s needed.

A 2011 United Nations report shows that New Zealand has the highest rate of reported intimate partner violence in the developed world and direct contact with the affected families might not always be an option.

To tackle this, Pet Refuge will be taking referrals through Women’s Refuge, the police and any other organisations that work in the family violence sector.

“Pet Refuge will be key to helping facilitate victims’ safety, as the new service will remove one of the many barriers for victims by providing their pets a loving temporary home during times of crisis,” Senior Sergeant Fiona Roberts, NZ Police’s National Family Harm Coordinator, says.

The temporary housing of pets will be free of charge to pet owners and instead rely on donations from the public for the general upkeep of the shelter.