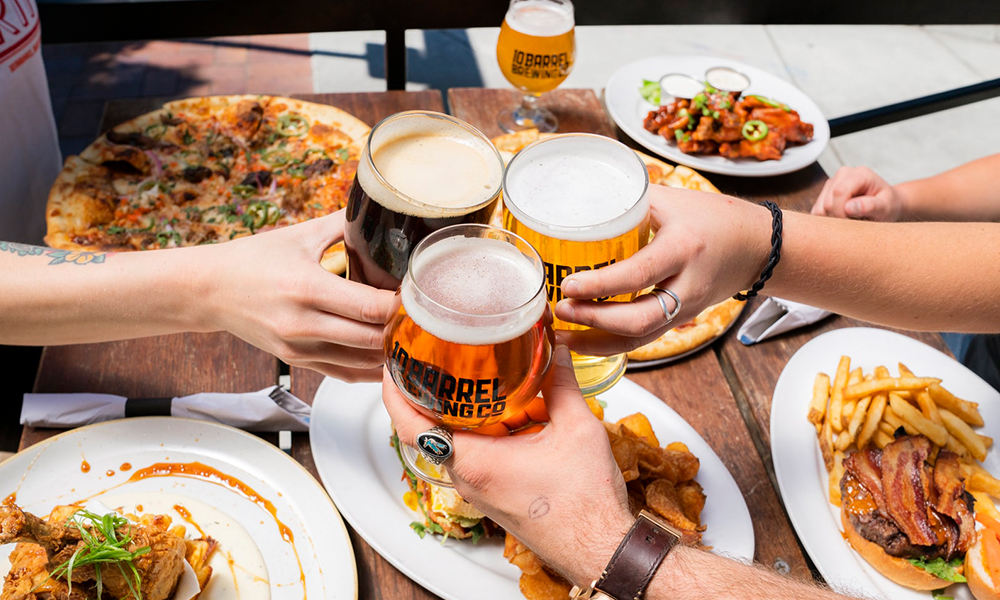 We set four nervous students up for what we thought might be a chaotic, wicked night of sexual tension. In reality, our four students were treated to a wholesome night of self-discovery and meaningful conversation - bless.

As far as dates go, this wasn’t one of them. As we all sat around the table at Mama Brown, I found myself feeling more like I was hanging out with a group of my friends, rather than on a blind date. We dispensed with the stock standard introductions (where are you from, what do you study, etc) and the “what looks good on the menu” talk very early on in the evening and were able to push forward to more engaging conversation. We bonded over the various alcohols we avoid, and the riveting stories behind said avoidance, and as we laughed over our jugs of sangria, found that we had more in common than previously anticipated.

A few seat changes later and the evening was in full swing. The group discussed all manner of topics from favourite films to how we would commit the perfect murder. We grew more comfortable around each other with every word, to the extent where we discussed the oh-so taboo date conversation...past relationships. As we talked and laughed together, it was clear that we all shared very similar ideas and hobbies, and a clear sign of comradery was building between the four of us.

However, our time was cut short (as I had another engagement to attend) and before we parted ways, the conversation shifted once more onto our favourite Vines. Any outsider peering into our table would assume we were old friends, and as we recited our Vines word by word, often finished each other's references, we ourselves felt this familiarity also.

Overall, the night was fueled by engaging conversation, good company, and the ever-faithful social lubricant that is alcohol. Will I cross paths with these individuals in the future? Who can say? However, the stories and jokes shared around that dining table were those that could be repeated time and time again, never failing to keep all members of our party smiling and engaged.

In the time honoured tradition of the Massive Blind date, I started with a pre-game wine or two. In fact I may have been still skulling my wine in the Uber there.

After the initial preamble and the excited ordering of food and booze we started talking. I forgot everyone's names several times. The conversation flowed relatively easy, with the best part consisting of recounting our favourite vines. As the elder statesmen of the group, the rest of them eagerly informed me what ‘fruber’ is. Spoiler: its not a sex thing, it’s actually a wonderful method to exploit a corporation! We were all very excited to eat and drink our way through the budget too! 200 dollars? From our student services levy? Amazing!

Now for the important shit, their signs;  there was me, the Aries Comms student, a Sagittarius 1st year Comms Gal, one Aquarius from Vic Uni and an Aquarius CMP 3rd Year, so there’s a lot to unpack.

But romance?! As a chaotic neutral, I had every intention of going in there just to fuck shit up. I was gonna ignore the guys, get the girl and ride off into the sunset. We did have a connection, we’re both Comms students with amazing makeup. I just love how girls understand each other.

“I’m talking to you telepathically, you get what I’m saying right?”

When my Editor told me one of them was a CMP student, I was wary.

It turns out I may have to readjust my opinion on CMP fuckboys, but they did concur that everything I wrote was 100% accurate. As an expert in body language and nonverbal communication I definitely saw a lot of mirroring, a lot of suggestive fiddling with phallic objects, a lot of dilated pupils. So I guess you could say that was pretty sexually explicit ;)

As the night ended, our Vic student comrade had to head off, and then there were three.

We got another sangria jug between the three of us. Our comms gal left us, and then it was just us two exchanging those same pretty sexually explicit body language signals. The night ended with us finding a SEALED bottle of Long White and going on to share it at the bus stop.

But really it was very wholesome. There were a couple of awkward silences and a couple of cringey tales, but all in all I hope we stay friends. Will we see each other again? Wellington is small, and Massey is even smaller, so I’d say highly likely.

A few weeks ago, I was convinced by some friends to apply for the Massive Blind Date - a night of banter, free food and a couple of drinks. What could go wrong? It would be a bit of a laugh either way! On the day of, I woke up with the immediate thought of… “Oh God, what have I signed myself up for?”

Fearing the worst, I had a couple of tequila shots (how does anyone drink that stuff… it’s disgusting) and headed to the restaurant.

I would love to be able to tell a blind date horror story about how awful everything was and all the awkward silences, but in truth, I had a very pleasant evening. I walked into the restaurant and the place was slammed with customers. After a short wait, I was shown to my table where we all introduced ourselves and started to chat.

After introductions, we ordered dinner and a round of drinks each (I ordered the most expensive meal by quite a lot, whoops). We sat around the table drinking our 3 jugs of Sangria, talking about everything and anything, conversations varied from university, to star signs, favourite vine re-enactments, to an extremely well thought out, intricate plot to get away with the perfect murder… yikes. After a bit more talking and probably a bit too much tipsy "opening up", we slowly trickled off until it was obvious that the staff wanted us to leave, then the rest of us went our separate ways home.

It ended up being a lot more like dinner with new friends than of any ‘date’ I’ve been on previously, but we all seemed to get along well.

So, cheers to everyone for a good night!

When someone says, “You’re going on a blind date,” you would think that you’d be talking to one other mysterious person all night, getting to know them and potentially seeing if there’s anything between the two of you. Well. I walked in (all dressed up, feeling amazing from the validation compliments I got from my friends before I left) and was shown to a four-seated table to meet three other similar minded humans that gave me a night of conversation, a good meal and a few jugs of sangria.

Being the youngest at the table, I felt like a fish out of water at some given moments as some things my peers would usually find funny didn’t sit well with the others. But the conversation was still good as the things we did have in common - like boy bands or conspiracy theories on how to get away with a murder - made me feel open-minded to other people, rather than the type of people I see on a regular basis.

It was a weird feeling, like you could tell them something but it could either go either way. As the alcohol sunk into my brain, the more I probably over shared when I should’ve stopped myself. But as the night got later and later and I got more tired, all I wanted was to walk back home with an over-priced ice cream.

When tipsy me finally did that I thought - hey, it wasn’t too bad after all. Got a good meal, good company and learnt that maybe I need to get out there more and experience life rather than sticking to a similar routine I do everyday.

How to introduce sex toys into your relationship