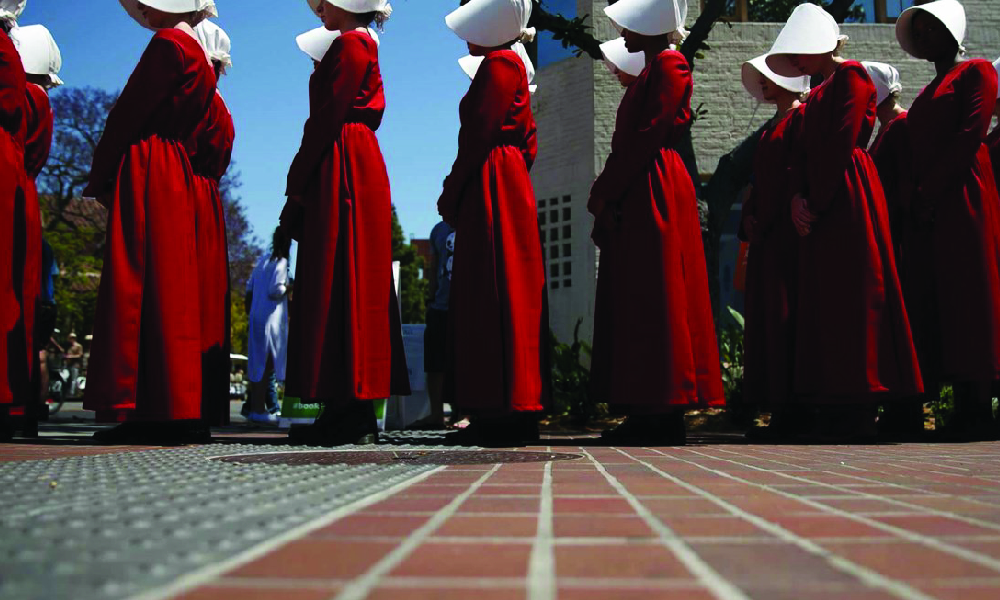 Why the Handmaid’s Tale scares the shit out of me

WARNING... Spoilers ahead! If you haven't watched The Handmaid's Tale continue at your own risk...

Based on Margaret Atwood’s 1985 novel, the Handmaid’s Tale television series boasts 96 per cent on Rotten Tomatoes, a clear favourite amongst viewers. Though unlike popular television shows of the times, this one doesn’t elicit laughter or claim a comedic feel. It’s not even like a regular drama that makes you want more. The Emmy and Golden Globe award winning drama forms genuine fear and angst amongst viewers and shows the possibly not-so-dystopian future of everyday sexism.

In a dystopian (or possibly rather hyperrealist) future, America is known as Gilead. An extremist Christian theonomy has overthrown American, with the aim of re-establishing order by introducing religious-based laws in the new world. The ever-so-gradual oppression of women is shown; starting with the main protagonist, June being publically slut-shamed, her bank account being seized and then the immediate loss of her job. She is exposed to violence and questioned about her morals as a mother; leading to her child being taken off her.  All throughout the series, subtleties in today’s sexism are taken and amplified in a timeless, frightening and real way.

The representation of normalising oppression against women is displayed steadily throughout the two season show. Audiences are only shown the distressing and limited view of what June sees. Watchers aren’t one step ahead of the game. They too, are in harrowing anticipation, wondering what will happen to women next.

In the show, due to harmful environmental factors, birth rates have declined to the point where fertility is rare. Those still fertile are kept as 'handmaids' and are essentially owned by a commander and his wife looking to have a child and are used as a host for the commander’s child to grow inside. The handmaid is no longer addressed as her real name, but as the surname of her commander. June unwillingly becomes known as Offred.

Although the future of children depends on these women, they are the lowest social class. Each month, during the time of the handmaid’s ovulation, they are forced to partake in a disturbing monthly ritual known as a ceremony which is really more like a ritualised rape. It’s like a crazy fertility cult, where women have no control of their reproductive rights. It scares the shit out of me.

Compare the atrocious apocalyptic future of Gilead, where women are stripped of their civil rights, to today’s political climate. It’s all too real. It’s 2018 and women continue to battle. Movements such as #metoo and Times Up are alive, well, and unfortunately necessary. Slut-shaming is frequent, pay inequality is real, workplace harassment is a genuinely daunting thing and women are fighting for reproductive rights. Just over a year ago, American Republican, Justin Humphrey, claimed women were mere “hosts”, used to grow and incubate babies. He went on to say women should seek permissions from their sexual partner to have an abortion. The fact that we even have to fight against these things and that are most definitely not fiction, again scares the shit out of me.

In New Zealand, we’re progressive when it comes to gender equality. We are far from women's' bank accounts being seized, and governments will never force us out of jobs but we still have to fight against strong gender inequalities. An example, the legalities surround reproductive rights in New Zealand. It is legal to have an abortion if two certifying doctors agree that carrying on with pregnancy would put the mother in serious harm mentally or physically. Though, the high court rules that a doctor who has a “conscientious objection” to abortion may refuse to refer you for assessment. Abortion is still not solely up to the woman involved. It scares me that a doctor who doesn’t agree with me wanting an abortion has the right to deny me the choice that would alter my life drastically.

The shock of believability that the not-entirely-fiction show portrays is a feeling that resonates with audiences.

The genuine fear, mortification and humiliation that is shown within female characters is something women of 2018 can relate to, often in frightening ways. Yeah, it’s just a television show but the scary representation of extreme sexism is all too real. So, if you haven’t seen it, watch it. Or maybe don’t.