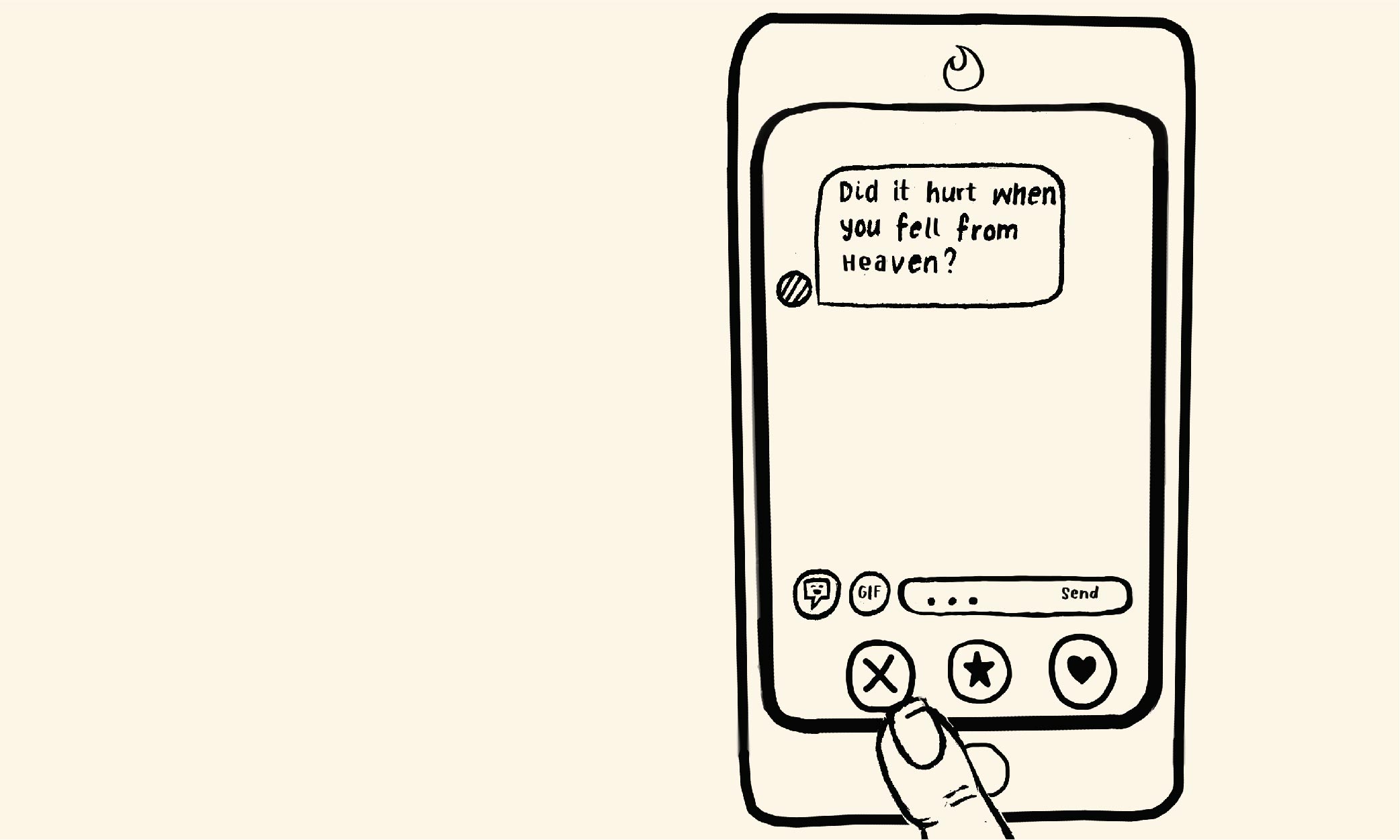 Tinderella: After the Ball

The glass slippers are off and her fingers are busy in more ways than one. So how is Little J going in her quest to find love?

Last issue, Little J left us in suspense. After landing a date with Computer Boy, she left us all wanting more. We waited eagerly for her story to give us an escape from finishing the APA referencing on that 2,000 word assignment… and yes, I am narcissistic enough to assume you read my last article.

So, how did the date go? A pleasant night, a simple movie date between two relatively compatible individuals and a quick kiss goodbye. Boring! There were a few awkward hand-brushing moments in the shared bucket of popcorn (a thrifty, yet risky move on Computer Boy’s behalf) and overall, the two found a mutual connection whilst watching the ‘Best-Picture’ winner, ‘Green Book’. While there’s not much to report, Little J says she’s still grateful she had the experience.

“I think Tinder has given me a newfound confidence,” she said.

“When someone is attracted to you, even though you don’t need that validation, it’s a nice feeling.”

Little J and Computer Boy have decided that, while the chemistry wasn’t quite there in real life, they’re still going to remain friends. Who knows, maybe CB has a cute brother?

Little J still remains optimistic in her quest for love, and continues to frequent Tinder when she has time away from her busy communications degree. She opened her options up to include girls as well. Interestingly, Little J commented on how she found girls harder to talk to online than guys. She said they were “awkward” and “less-willing to start a conversation”.

We attributed this to the social stigma; boys on Tinder are expected to make the first move. The “online rules” for same-sex relationships on Tinder are not quite so distinct. I suggested that Little J try looking into apps specifically for female relationships, such as Her. She smiled, telling me that while she’s interested in exploring that side of her sexuality, she’s not “craving that right now.”

Little J’s comments on the unspoken expectations of boys and girls on Tinder left me wondering about the overall LGBT+ experience using the app. I decided to speak with a colleague of mine, who is a member of the LGBT+ community. For the sake of this ‘Gossip Girl’ inspired fantasy, we’ll call him Eric.

Eric found his real-life Prince Charming through Tinder, creating an account after a breakup with his long-distance boyfriend. After only having Tinder for five days; he found a potential date. Even in that five day stint, he still had his fair share of unsolicited dick pics.

Eric’s partner, a science student at Auckland University, won his favour through a mutual love of coffee and obsession with plants. The two clicked right away and have been together for four months.

I asked Eric if he experienced stigma for being in a relationship that formed online. “Yes,” he replied with a sigh, “I almost feel bad about meeting people online because for whatever reason, saying you met online is embarrassing.”

Eric shed some light on the online-dating experience as a gay man. “Tinder is seen as the relationship-focused version of Grindr,” he explained; Grindr being a male-only dating app known in the gay community for getting quick and easy hook-ups.

“I think gay men need to rely on Tinder more, as I can’t assume anyone is flirting with me in my day-to-day life.”

Eric expressed the hardship of having a sexuality that is apart from the assumed heterosexual. Online dating provides assurance that the person you’re matching with is definitely looking to be with someone of your gender. It became apparent that gay people relied on Tinder more as a means to form a relationship, due to a lot of gay men feeling uncomfortable with having to guess people’s sexuality in ‘real-life’.

When I asked one of my lesbian friends of her experiences, she was more blunt. “Tinder has lots of spaghetti straights,” she said, referring to girls who were interested in trying a bit of girl-on-girl action, but weren’t necessarily bisexual or lesbian; “Or couples looking to spice up a dead sex life.”

She much favoured female-only apps, saying they were more direct. She found that girls using single-sex apps like Her to form their relationships had a more positive approach than those on Tinder.

Tinder, and its competitors, offer a world of possibilities to this modern age. With the ability to swipe through hundreds of people in a day, it can be overwhelming and sometimes hard to comprehend that each of these people (except for a few AI robots sent by Mark Zuckerberg to spy on us) are real humans.