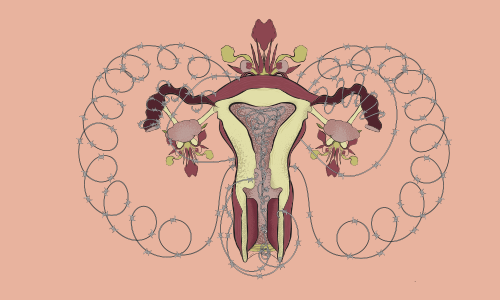 Talking about periods can often feel like a burden. Because, often, having a period is a burden. Your body can ache, bloat and demand extra attention when you just don’t have the time. On top of this, many women have to worry about contraception, an issue loaded with ideas of pregnancy, acne and mood disorders. Although those yoga-flexing Lycra-wearing women promoting the latest pads might look like they’re having the best time on their periods, for young women around the country that’s often not the case. Trying combined pills, mini pills, injections and IUD’s, there’s definitely no ‘one size fits all’ for the woman who wants to live her carefree life while on her period and a contraceptive.

For Sarah, a young woman living in Karori, she uses Evolve, the free health service for under twenty-five-year olds. Having been in a relationship for a few years, and after trying dozens of overbearing oestrogen pills, she decided a calming progesterone-only pill was more her style.

“It has the bonus of no periods for me, so not only do I not have to worry about pregnancy, but my body doesn’t swell up like it used to,” she said.

For many young women like Sarah, the mini-pill (also called Cerazette or Noriday) is a much more convenient style of contraception. It’s a small pill taken every day that can often reduce bleeding and can reduce the side effects of cause weight gain or depression – it’s also fully funded.

For second-year student Maria, she wouldn’t be without her Lunette every month. The menstrual cup is a sustainable alternative to tampons, and although the initial $40 cost may be steep for a student, the long-term benefits are huge. Environmentally, tampons are a huge pollutant, but New Zealand’s Lunette helps those, like Maria, play their part in creating a more sustainable future.

“I feel like not only am I doing my part for the environment, but I don’t have to go changing my tampon all the time now – it’s great!”

Maria wasn’t the only one who loved her menstrual cup. Phoebe, a dancer, said she had always wanted to try a menstrual cup, so she saved up and bought one from Wā Collective. A Wellington-based business, Wā Collective predominantly market to students and young women. Phoebe said she thought it would just be a cool thing to have, but then she managed to dance and exercise with it.

“I’d never go back to pads and tampons – you seriously can’t feel it’s there when you’re moving around!”

Anna is a masters student with endometriosis. After years of different contraceptives, breaking down in front of doctors and suffering through pain that even a hot water bottle couldn’t help, she was finally given a Mirena IUD. The progesterone-based, internally placed device sits at the top of the cervix for five years until it needs to be replaced. For Anna, her pain has finally gone; she can continue to study, socialize and no longer dreads her period.

“Periods for me used to be hell. I couldn’t leave my bed, getting to the bathroom was hard enough,” she said.

“Now I’m walking to uni, seeing friends and going to the gym as if my endo’s completely gone – it’s amazing.”

Victoria is a young woman I met in a coffee shop. She had just come back from the health centre, having had the Depo Provera injection and in need of a coffee kick. I asked her why she chose to use the injection instead of the mini-pill or the IUD, and she said it all came down to cost and convenience.

She’s not wrong. The Depo Provera – although not the most comfortable contraception – usually provides women with minimal periods, a general lack of worry about pregnancy and often the next injection is scheduled in advance. Easy, breezy but a little sore.

Most of the above contraceptives are available cheaply through Massey Student Health clinics, or your regular GP. However, that’s not to say that there’s not still going to be a shadow of doubt next time your period does or doesn’t come along (remember the Depo Provera can change your period schedule in a flash) so always be prepared next time you’re ready for some lovin’. And if you’re still having doubts, Student Health Services continue to provide free counselling, no matter the issue – sometimes it’s just better to talk.