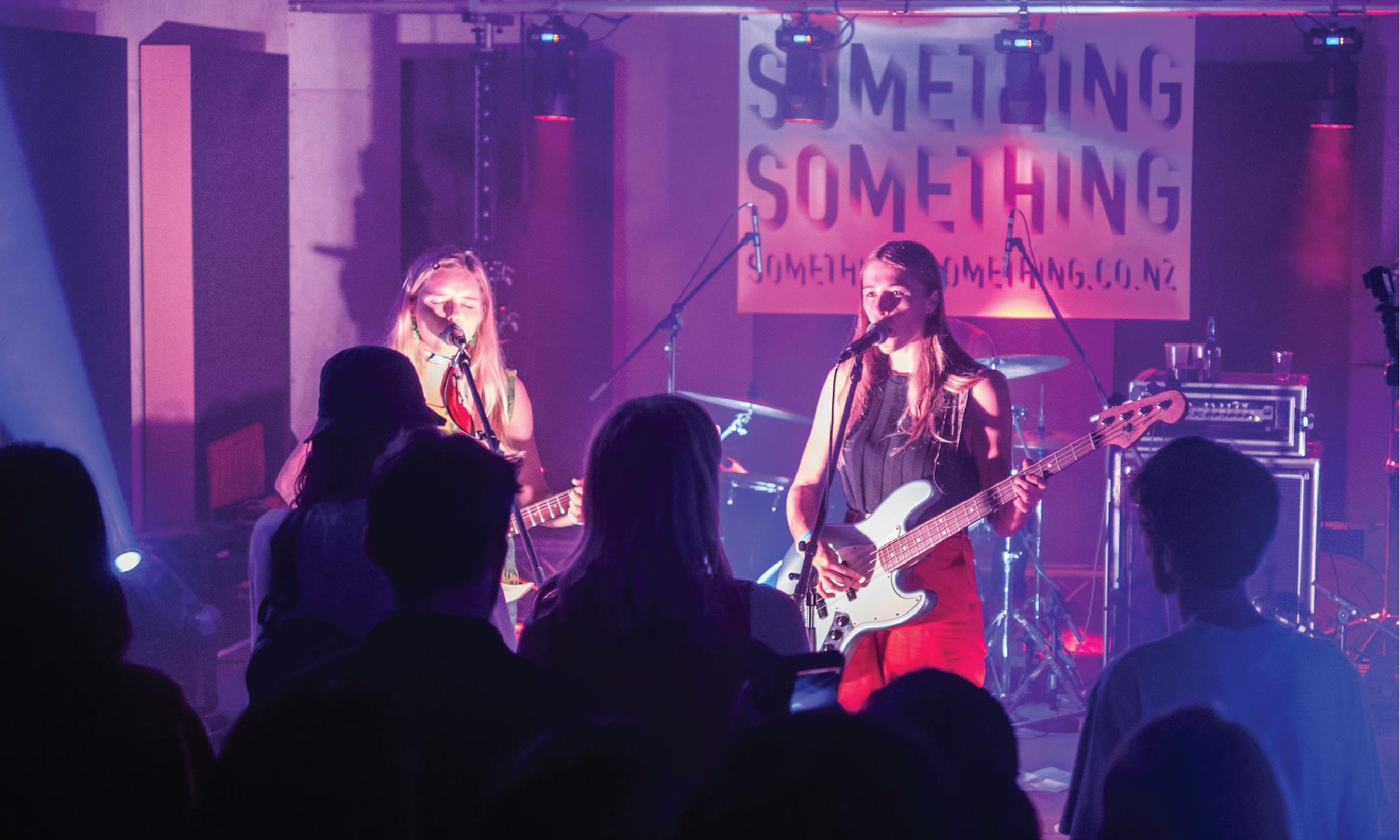 Something Something is not a title that evokes clarity. Quite the contrary, in fact. You will have heard the name floating around the Welly campus - but you might still be asking, what is this ambiguously labelled being? I spoke to Elleana, Jack, and Charles, three of Something Something’s leaders, who explained that officially, it’s a club revolving around music, run by Massey students. Unofficially, it’s a giant web of people who have been involved at Massey at some point in time, who work together to create top quality tunes and put on epic shows.

Aligned with the three majors of Massey’s Commercial Music degree, they might be musicians, tech experts, or industry experts.

“That’s what makes us a bit unique - we’re touching on the behind the scenes, not just the final output of the artist,” Elleana explained.

The humble student civilians of Massey Welly usually just witness the end product of Something Something’s hard work, which so far, has taken the form of some very nifty music events. There was the multi-room festival at the beginning of the semester, the multi-club event in the pyramid - notably involving free kombucha - and three stage slots at Cuba Dupa, all of which went down an absolute treat.

But there’s an awful lot that goes on behind the scenes, too. They have a thriving social media presence, and through their rapidly growing website each artist, industry or tech genius has a personal profile, which can be used to connect with other geniuses to achieve anything one could dream of in the musical world. Alluding to a kind of Tinder for music professionals, it’s pretty handy platform, and can help you organise things from head to toe.

“If you were going to throw a gig, you could come onto the Something Something page and find someone to do your lights and sound, someone to play the support for your acts, and someone to promote the show,” said Jack.

But they also extend the offer of involvement to all students. They recognise that what goes into making good music and events goes beyond the majors of their degree; so they welcome anyone with other talents like design, videography, and notably, any free kombucha suppliers. They aren’t just running a club, they’re building a base for a collective that they hope will eventually dominate the Welly music scene.

Even with the great success so far this year, the Something Something crew have shown that they’re only just warming up. Their presence online will grow exponentially as more students go through the course, which will prove to be more and more helpful for everyone involved. As for the upcoming events, they gave me some very good goss - including a big show at the beginning of May with an All! Female! Lineup! Could this club be any cooler? When asked about the motive for the idea, they gave all the right answers.

“We feel like we’ve got some amazing female artists, and there are a few all-female shows in Wellington, but we don’t feel like there’s enough, so we’re trying to cater to that need,” Charles said.

How great! They’re also flexing their Welly stereotypes with a gig in a tap room, providing a range of craft beers to sip whilst being serenaded by all sorts of artists. Be sure to hop along to that at the end of April (see what I did there?)

Something Something was only birthed last year as the brainchild of one of the commercial music lecturers. Ben Howe saw a gap where there should have been a platform for music students to promote themselves, collaborate and gain some real-world experience while at uni. In an unconventional and unpredictable environment like the music industry, ideas like this one are invaluable for talented people to gain exposure. After only a year of the club running, not only have the benefits for the music students been well and truly reaped, but Massey locals and the wider community have had their ears blessed on the regular, for free or for pittance. It certainly seems like a hefty task to run a collective as active as Something Something, but it’s clear that these guys are backed by an unfailing force of passion. They’re ambitious and it looks good on them - so I’d keep an eye out if I were you.