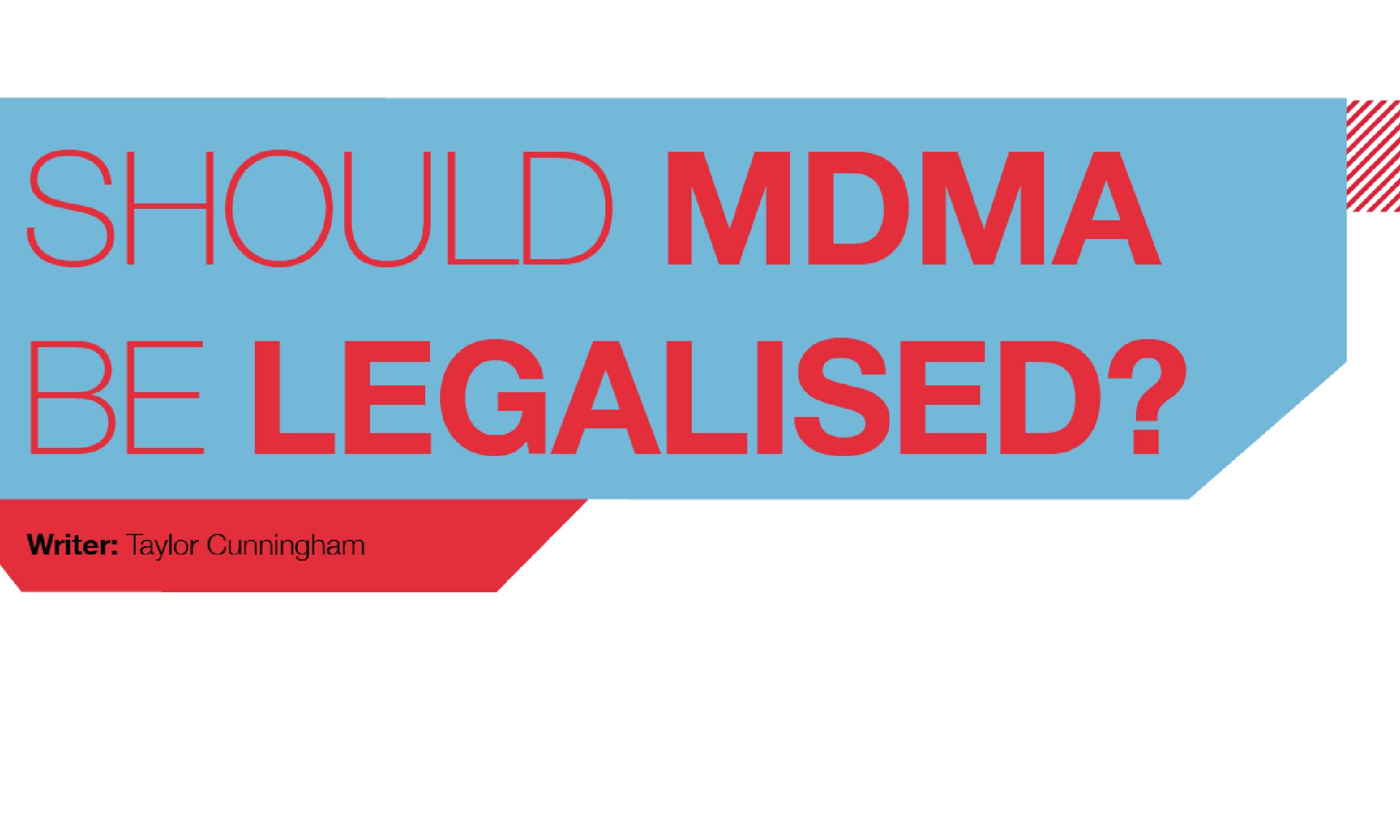 Should MDMA be legalised?

As the world begins to open its eyes to the benefits of legalising cannabis, discussions have arisen about whether to legalise – or at least decriminalise – other commonly used drugs. One such drug is 3,4-Methyl​enedioxy​methamphetamine (MDMA for short, and commonly known as ecstasy, gear, Molly or pingers – take your pick). Like the cannabis debate, the benefits of MDMA legalisation appear to outweigh the negatives – especially from harm-reduction and medicinal standpoints. However, there is still a stigma surrounding the use of this illicit drug.

MDMA is a psychoactive substance and stimulant with minimal hallucinogenic effects. Simply put, it increases energy, alters sensations, and causes feelings of empathy, euphoria and pleasure due to it increasing the activity of serotonin, dopamine, and noradrenaline in areas of the brain. Unsurprisingly, this is why it’s mainly used for recreational purposes.

But what goes up must come down, and the same rule applies to the brain. MDMA can come with negative effects such as paranoia, rapid heartbeat, overheating and dehydration. And the “blues” refers to the feelings of depression and tiredness commonly experienced once the effects of the high fully disappears.

The negative effects of illegal drugs are often exaggerated and amplified by mainstream media and conservatives, with no recognition whatsoever of their positive effects and medicinal potential.

However, The Greens NSW is one such Australian political party calling for the legalisation of MDMA in New South Wales in order to counter the harm dealt by unregulated, dealer-bought, impure psychoactive drugs.

The Greens’ policy initiative document states, “MDMA will be sold over the counter in pharmacies to anyone over 18 with a valid photo ID, with a limit on the amount able to be purchased.”

There are also further plans detailed to effectively control the drug, such as the requirement to record all sales, government-run production and distribution with consistent concentration, and informative packaging regarding health and treatment. It would also include the prohibition of advertising, and revenue from sales will go to community education and drug treatment programs.

Prior to the announcement of these plans, The Greens NSW MP Cate Faehrmann made a bold admission about her past casual use of MDMA, in a piece she wrote in the Sydney Morning Herald.

In doing so, Faehrmann shone the spotlight on the hypocrisy of the “don’t do drugs” stance, considering how many politicians take or have taken illegal drugs, and the impact alcohol, smoking and prescription drugs has on people. She also discussed how measures such as pill testing and “less high-visibility policing and zero sniffer dogs” can reduce drug-related harm and save lives.

There have also been calls for legalisation on our side of the ditch from Dr Paul Quigley, an emergency doctor and clinical toxicologist at Wellington Hospital. He is an advocate for legalising and regulating MDMA, after treating people who are under the influence of “novel synthetic agents” purchased online.

Dr Quigley told Radio New Zealand National that controlling and regulating drugs like MDMA could discourage the use of unsafe alternatives.

Although Dr Quigley admits it can still cause harm – especially to people with mental conditions – he said street-bought ecstasy may come in a mixed form or not contain MDMA at all, which are “outright dangerous.” These generally contain substances that increase blood pressure and heart rate, as well as being addictive and highly stimulating.

In terms of MDMA’s medicinal benefits, it is achieving profound results for the treatment of post-traumatic stress disorder (PTSD) – a notoriously difficult disorder to treat.

Studies in the US found that, when administered pure and safe MDMA along with psychotherapy, war veterans’ symptoms decreased and even 68 percent were entirely freed from the disorder (in terms of PTSD’s clinical criteria).

Ben Anderson, a Vice war correspondent, has undergone MDMA treatment for his PTSD and said on the Joe Rogan Experience that it makes everything easy to think, address and talk about.

He then explains that “MDMA just allows all the parts of your brain to communicate again,” freeing itself from constant fight-or-flight mode.

Further, he said there’s no comedown experienced in the days that follow treatment.

Interestingly, 87% of MDMA seized here is found in the mail. And offshore purchases of MDMA through the dark net has led to more cleaner substances showing up in testing in NZ.

“It's gone from about 70 percent to around 90 percent over the last two years of samples.”

Many Kiwis are now seeking out better quality and safer MDMA through the net. This seems to be because the government’s current stance is ineffective in reducing drug-related harm.

The benefits that could come from legalising and regulating MDMA are immense, while the risk is marginal since people take drugs regardless of authority. So why not regulate, educate and inform – taking a stance that discourages both recreational drug use and burying our heads in the sand.