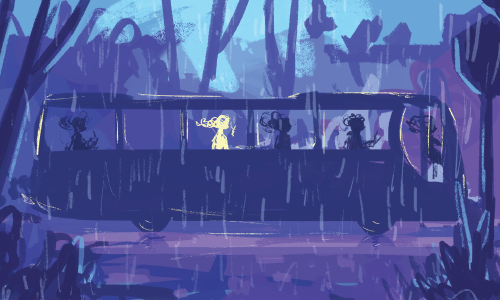 Recently, I’ve been adjusting to using the pretty primo public transport system Wellington has to offer. Our city’s infamous rental crisis has got me busing from Karori to Massey five days a week, but it’s surprisingly made easy with the campus connection route (it’s number 18 for all you Karori-virgins; seriously, get yourself over there, it's a glorious combo of wealthy suburbia and rolling hills). Despite the expected rush hour traffic, the bus isn't usually more than a couple minutes late, and with the constant running through of orange lights, I always make it to class on time.

It’s not just Metlink’s timetables I’m impressed with. I also have a particular admiration for the bus drivers of the city. They might not always be the most patient bananas in the bunch, but they have good excuse. They’re under constant pressure to stick to the schedule, stop at very short notice, and most of all, not be visibly mad at the passengers who don’t have enough money on their Snapper but still expect to be let on. All of this would be completely manageable, if Wellington’s roads weren’t hand-crafted by the devil himself. We’ve got the windy, steep streets, the tunnels barely wide enough to fit a financially fortunate student’s Suzuki Swift, and the motorway on-ramps with a massive lack of sign posting (spoken from experience). Of course, bus drivers are well-trained and familiar with the roads, but this learner driver wouldn’t last one traffic light change before causing some kind of catastrophe. One driver of mine did actually collide with a small car the other day, and while us passengers watched on like frightened goldfish, he popped outside, had a calm chat with the driver, took some snaps of the damage, and proceeded to back out of the collision and continue on with the journey. Despite being slightly concerned that a person in some state of shock was in charge of my safety for the next ten minutes, I was far more impressed at how calm he appeared on the outside, and how quickly he dealt with the predicament.

To take a step (or ride) further, Wellington’s train system also thoroughly impresses me. While I’m no train connoisseur, everything seems to run smoothly, the only obvious stuff up being that you can’t use your Snapper to pay. But this is absolutely made up by the excellent announcers. For once, they do not in any way sound robotic, in fact, they sound so warm and friendly I’d half expect them to pop over to my house with some homemade banana loaf. The gender of the voice frequently changes, and the pronunciation of Māori place names is exceptional - a trillion times better than Siri’s attempts.

So, all in all, I think Wellington’s doing a pretty fab job of getting us from A to B, even if we usually complain instead of complementing our Transport Agency friends.

The one thing that’s been niggling at me has nothing to do with public transport, and everything to do with normalised behaviour whilst using it. We all hate sitting next to someone and we practically recoil in our seats when someone plonks themselves on the adjacent seat. This is completely understandable. We all like our personal space, and you never know what kind of weirdo you could end up next to. But what’s the harm in finding out? It’s no new revelation to chat to strangers when you’re waiting round, in fact it’s a fairly old one, but seems to be one we’re losing.

Now, I’m gonna sound like your old granny who frequently refers to using the internet as ‘on the line’ for a second, but hear me out. Most of us are phubbers - that is, people who stare at their phones to avoid social interaction. This doesn’t account for everything. Obviously, riding the bus is the perfect time to check if the flat needs a top up of milk, or look up the recipe for the meal you were supposed to have ready ten minutes ago. However, as helpful, inspiring and engaging the information our handhelds give us is, we get so absorbed in our digital worlds, that we don’t even glance up at the person sitting next to us, let alone ask how their day’s going.

A particularly brave flatmate of mine has taken it upon herself to start a conversation with a fellow passenger at least once a day. While it’s proven a decent challenge, within a couple weeks, everyone has reciprocated to her awkward conversation starters in a super friendly way. This might sound like a pointless and uncomfortable waste of time, and believe me, I’m not putting my hand up for fifteen minutes of awkward silences with jubilance. But who knows, if you take the social leap, you might make someone’s day, have someone make your day, learn something very interesting, or just make a friend. The opportunity is staring you right in the face.