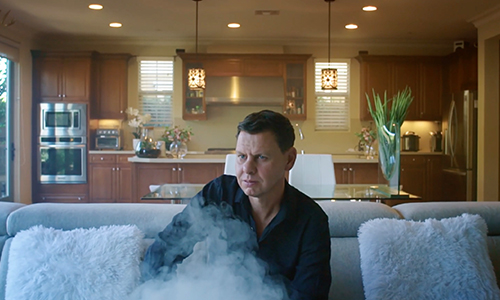 Patrick dives into the world of marijuana to explore the plant’s pros and cons within its medical and recreational uses.

“It’s just such an amazing plant and it brings out so many emotions in people — people get angry about it, people get sad, it makes people happy,” he told Massive.

There has been a lot of debate over the legalisation of marijuana, but he thinks the problem lies in the fact that nothing is getting done quick enough.

“At least let’s have a decent debate about it rather than just a couple of people yelling at each other on morning radio and TV. 1) it’s fucking dumb and 2) it’s fucking boring. I just want to give a voice to the people who don’t have a voice in the debate at the moment... It’s a cool plant. I gained a lot of respect for the plant along the way and it deserves a good debate.”

The documentary has taken 18 months to put together, including the travel time. From Patrick’s travels he found the countries and states that had legalised Marijuana were very forward thinking.

“Around the world increasingly countries are starting to move towards it and it’s always pretty amazing when you see states of America legalizing it and a whole country like Canada that’s pretty similar to New Zealand — they’re doing it.”

One of the biggest things Patrick focuses on is the medical side of cannabis and how it affects those in need.

“People have increasingly realised that it’s useful to help people, especially suffering with pain and cancer. So many relatives and loved ones are getting wiped out with cancer at the moment that people are starting to turn to it more and more, which is making it a bit more acceptable,” he says.

While roaming New Zealand for the documentary, he interviews two Kiwis providing homemade cannabis products for those who are ill and can’t get any relief from their traditional medication or use it to replace other treatments. These two kiwis along with many others are known as the ‘Green Fairies’.

“I think of them as heroes because they risk their own lives legally to help others, which is pretty cool,” Patrick said.

In the documentary, Patrick interviews two green fairies who supply cannabis illegally in different parts of the country.

Cancer is a topic that hits many New Zealanders close to home, including Patrick himself.

“My mum died of lung cancer about 10 years ago, and so I interview my dad about how he managed her pain, which was by using morphine - the traditional kind of way - and basically there’s nothing that you can do for someone in that state, but cannabis is there as an option.”

Chronic pain affects 16.9% of the New Zealand adult population, and overwhelmingly 28.1% of people aged 75 years and over.

“It doesn’t actually do any damage at that stage, but it might actually help them, and there’s a lot of evidence that it does… Why aren’t we using something that comes from a plant to help people,” he said.

Considering the marijuana referendum comes out in 2020, Patrick believes that doing a documentary on it is the best thing for him to do.

“Because weed is really misunderstood and it’s really complicated. There’s a lot of different aspects to it, there’s the medical and scientific side, there’s the illegal and criminal side, then the fun side and there’s all the bad things it does for you as well.”

There was once a gap in the market for medical cannabis in New Zealand but the Green Fairies have filled that gap, he said.

“We have got a medical cannabis market in NZ right now it’s just technically illegal… We’re finally getting around next year to getting people some decent access to medical marijuana in this country but people have already gone and sorted it out themselves and found ways of getting it themselves… surely we can get this done quicker and better.”

Since being involved with traditional news journalism for over 20 years, this documentary is one of Patrick’s biggest achievements in his career.

“I’ve just put so much heart and soul into the bloody thing. One of the cool aspects to it is that the guy I made it with Justin Hawkes, him and I went to uni together, and we always talked about making a documentary together. It took 20 years, but we’ve done it.”