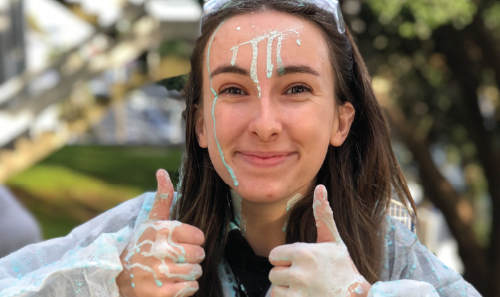 With the recent revival of some of our favourite childhood stars (think Suzy Cato and Savaughan Ruakere on the recent season of Dancing with the Stars New Zealand) it got me thinking about all things that reminded me of being a child, the quintessential kiwi kid.

And what is more kiwi than being gunged?  It was every child’s dream to make it on to What Now and get gunged. Or call in and get sent a pottle of gunge. It was the stuff dreams were made of. I remember watching the show with my younger sister and making her call the 0800 number because I was too embarrassed to call in. We were heartbroken every time the line was busy.

What Now hit screens in the early 1980s. The show has seen a raft of different presenters and skits over the years, but gunge has always remained. Gunge has become something of an icon here in Aotearoa. In recent years, The Spinoff released its very own investigation into what gunge is made from. After an exhaustive investigation, What Now’s secret gunge formula remains a secret. On Reddit you’ll even find a discussion, ‘People who have been hit by “gunge” on What Now what is it like”.

If gunge is the shining star of What Now Thingee must be a close second.

Moving forward we put the feelers out and got in touch with some Massey students who were lucky enough to have been gunged during their childhood.

Massey student Ashleigh Manning was lucky enough to fulfil every kiwi kid’s dream of being gunged.

“I was still at Primary School, and What Now had come to Waipukurau to do a show at the aerodrome.”

She says she was quickly chosen to play a game where she had to name things starting with B which flew. She was one of two kids standing when the bucket of gunge on her head was spilt all over her.

“It was icky, sticky and gross. It was green too, I remember that much.”

“We went to the What Now studios in Lower Hutt for my friend Kristin's birthday,” she tells Massive.

“We had to get up really early so that we could be at the studio at 5am so they could get us sorted before the show started. I remember they gave us sausage rolls for breakfast.

Parker says because it was her friend’s birthday she was selected to participate in an obstacle course. She says her team lost the obstacle course competition and got gunged.

“They put us in that weird little capsule thing and we were all kind of squished in there.

“The gunge was actually really horrible. It was really thick and felt so awful in my hair. They did a big close-up on my face because I was so clearly disgusted by it.

“Afterward they let us have a shower and I clearly remember there being no shampoo or anything in the showers, so the gunge was incredibly difficult to wash out.

“I can't say it had been a dream of mine to be gunged, but it's a great claim to fame now.”

With all things gunge in mind we at the Massive Magazine office decided there was no better idea than to make our own knock-off gunge and of course, test it out on somebody.

That lucky someone is Massey at Wellington Student Association (MAWSA) President Emma Pearce.

Pearce like so many other kiwi millennials has a childhood memory with gunge and jumped at the chance to relive this memory.

“Growing up it seemed as though everyone watched What Now and being gunged or hit with the foam gun was secretly everyone’s dream,” Pearce tells Massive.

“When I was around nine years old I got to love this dream... sort of.

“My best friend got gunged when What Now came to Auckland many moons ago. I had the opportunity to participate as well, but I was too scared that it would stain my clothes.

“My friend, however didn’t want me missing out on the fun so decided to make sure I got it all over me as well.”

Pearce says luckily the gunge, which she describes as having a consistency like eggs, didn’t stain her clothes. But she was left feeling like she never really got the chance to fully experience what it was like to get gunged.

Being the good samaritans we are here at Massive we decided to help Pearce relive her childhood dream of being gunged. But this time we would do her justice.

One things for sure there are a hell of a lot of gunge recipes on the internet. We knew we wanted something that mimicked the consistency described by Pearce, but we weren’t willing to waste dozens of eggs in the process.

Some YouTubers suggested using custard powder as a base for gunge – made sense when keeping in mind we wanted our gunge to have an “eggy” consistency. But we decided to keep looking, eventually deciding to go with corn flour instead.

We needed to make sure our gunge had a bright colour like the blues and greens we remembered from What Now’s gunge. We didn’t want to stain anyone’s skin though so after careful consideration we used just a small amount of food colouring. A little goes a long way.

It was surprising to find out just how much corn flour we needed to use to get a gunge-like consistency (we ended up using six kilograms of the stuff) but finally our gunge was ready. It didn’t smell too great and it was a little lumpier than we would have liked, but after a day’s hard work it was as close as we were going to get.

We had our guinea pig; our home-made gunge was ready and now we needed to scope out the perfect scene for Pearce’s gunging. After rifling through the office, we found an old paddling pool for Pearce to stand in and even a hazmat suit to protect her clothes (we really didn’t know how the gunge was going to react with, well anything). Being the sensible woman she is, Pearce even brought along a pair of safety googles, just like the kind they would give you to wear on What Now.

With multiple cameras set up from all angles to catch the moment we were ready to go. It was the moment we had all been waiting for. And it went off without a hitch. You can head over to the Massive Magazine website to see a video of Pearce’s gunging if you’re interested.

We hadn’t made a mess; our gunge hadn’t caused Massey Wellington’s student president to break out in a rash and even more amazingly it washed straight out of her hair. All in all, it had been a success.

More importantly, Pearce was happy. She had successfully relived a childhood dream. And this time she had seen it out properly.

“I got to relive this long-forgotten dream of mine when Massive approached me to be gunged.

“I’ll tell you what, homemade gunge is nothing like the real deal by a long shot. Having it dumped on my felt like having a blanket chucked on my head that then hardened like clay as opposed to the snotty consistency of What Now’s gunge.

“Though the texture, colour, and smell were way off the real deal you can’t beat the amount of fun you get being surrounded by friends and having shit dumped in your head.”