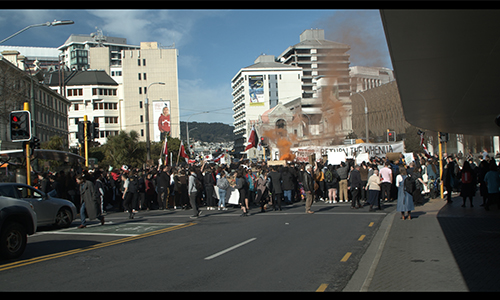 Tensions at Ihumātao came to a boil last month, spilling over into social media as well as mainstream media. It’s easy to pick up snippets of a bigger picture from Instagram stories and news reports; here is a timeline of the land dispute to help piece these snippets together.

1863: The land is confiscated ‘by proclamation’ under the New Zealand Settlements Act in 1863 as part of the colonial invasion of the Waikato that drove mana whenua from their lands. These Crown actions breached the partnership agreement forged in the 1840 Treaty of Waitangi.

1869: The land is sold to a Scottish settler family believed to be the Wallaces, whose descendants hold onto the land for more than a century.

1960-2000: In 1960, Auckland City Council begin work on a large sewage treatment facility on the foreshore of Manukau Harbour. The Oruarangi River is blocked off from the harbour, and water flow is reduced to a trickle. Large oxidation ponds caused water and air pollution. For 40 years, the people are unable to access the waters that had fed them.

“They removed the bodies and gave them back to us in sacks,” one elderly Kuia told Massey CMP student Nicolette Hurnen when she visited Ihumātao earlier this year.

2012: Watercare announces plans to divert huge volumes of sewerage and stormwater from Central Auckland to the Māngere Wastewater Treatment Plant. There is ongoing community opposition to this plan on environmental grounds.

2016: Fletcher Residential Limited is granted approval to build 480 houses on the last remnant of rural land in Māngere in the Ihumātao area, the site of an ancient pa situated on the slopes of two volcanoes, Ōtuataua and Te Puketāpapatanga a Hape/Pukeiti. The land block is sold to Fletchers and the Wallace Family end 153 years of continuous occupation.

2016: Members of the community start to occupy the land in protest.

April 2017: SOUL (Save Our Unique Landscape) take their fight to the United Nations hoping for an intervention to address alleged breaches under the Declaration of the Rights of Indigenous People.

The UN report recognises that consultation and consent from Māori had not been adequately sought.

“We have been to the United Nations… and mobilised our people, but that hasn’t been enough to prevent Fletchers from advancing their development and that’s purely because the law is set up against us,” Pania Newton, one of the founding members of SOUL, told Nicolette Hurnen.

November 2018: The Environment Court decline to overturn the permission granted to Fletcher Building to build the houses on the site.

23 July 2019: An eviction notice is served to protestors occupying the land. Police arrive on site to enforce the notice and arrest three people.