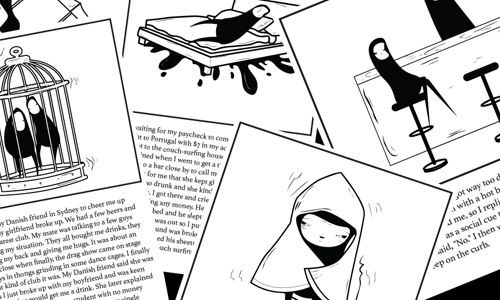 I went to visit my Danish friend in Sydney to cheer me up after me and my girlfriend broke up. We had a few beers and went to the nearest club. My mate was talking to a few guys and explaining my situation. They all bought me drinks, they were slapping my back and giving me hugs. It was about an hour before close when finally, the drag show came on stage with two guys in thongs grinding in some dance cages. I finally clicked what kind of club it was. My Danish friend said she was telling guys I just broke up with my boyfriend and was keen to fuck any guy that would get me a drink. She later explained that she knew exactly how to get a student with no money drunk as fuck and make him feel wanted by every single person in the room. - Anon

I was at some markets in Pakistan with a funny tummy… I thought it was a fart but it was a violent shart that dribbled down my leg. To get home I had to ride in a tuk-tuk for 30mins in 42 degree heat. - Grant

One of my Tinder boys suggested that we go road-tripping from coast to coast. It was incredibly spontaneous with nothing planned other than to sleep in the van. 117 kilometres from our starting point, we were parked next to a remote public toilet by the beach and made it our campground. It's safe to say the wind wasn't the only thing rocking the van that night. I am quite infamous for loving morning sex and howling like a banshee in bed. So when the sun rose, your girl went for round two. There I was, lost in the hair pulling and the spanking, getting into the zone until I looked out the window and made direct eye contact with an old man about to enter one of the public bathrooms no more than ten feet away from the van. Needless to say, I lost all my dignity that morning. - Krystal

I was at a bar in Peru, I got way too drunk and started practicing my Spanish with a hot bartender. She said she couldn't understand me, so I replied with, "Do you want to understand me?" as a social cue to get her to sleep with me… she blatantly said, "No." I then waited for my taxi outside and fell asleep on the curb. - Ryan

I was waiting for my paycheck to come through but still took my flight to Portugal with $7 in my account. I needed to get a bus to get to the couch-surfing house I booked to stay at. My card declined when I went to get a ticket. I bawled my eyes out and went to a bar close by to call my bank... The bartender felt so sorry for me that she kept giving me margaritas on the house, I got so drunk and she kindly drove me to the couch-surfing house. I got there and cried in this strange man's arms about not having any money. He also felt sorry for me and let me sleep in his bed and he slept on the couch. I pissed his bed. The next day he was out so I put them straight in the washing machine that I found was broken, he came home and I had to explain that I ruined his sheets with my urine… He still gave me 5 stars on the couch surfing app! - Korynn

I swear I didn't get this out of a movie... I was in Aus and got far too drunk. I got back to my hotel room and hopped straight into my birthday suit for bed. I needed to pop to the loo in the middle of the night and took the wrong door. I was naked in the hallway of my hotel and the door closed and locked itself behind me. I crawled down the hallway naked and tried to see if anyone's doors were open. Finally, one opened to a sleeping couple, so I crept into their bathroom to grab a towel and then snuck back out and down to the foyer… I waited 30minutes freezing my balls off with nothing but the towel for someone to come help me get back into my room. - Paul