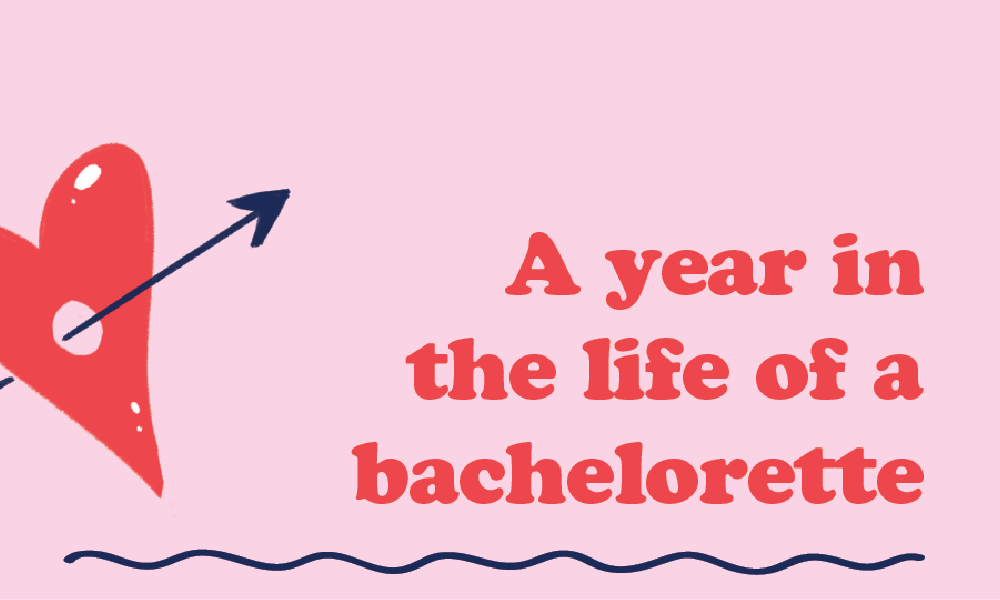 A year in the life of a bacherlorette

We live in a world where meeting your soul mate in the bar is no longer the go. We now live in a world where we simply swipe right or left on a phone depending on someone’s looks and bio. So many people say it’s superficial, but let’s be honest you’d only go up to someone in the pub if you were attracted to them so it’s really not that different.

I got in to my first relationship in six years last year in October and in all honesty, it turned into an absolute cluster fuck to say the least. I feel like most people would not go back into dating after what I went through. But my mother didn’t raise a quitter. So, I set off on my quest to find my forever dick. You are all going to laugh at my year of dating, but babes, if I haven’t lost hope after everything that has happened then I’m sure you won’t either. So here it is, I present my 2018 year of dating. This is only some of the dates, amongst them were fuckboys, liars, cheaters and the very rare good one every now and then.

Let’s call this guy Tom (because well he looked just like Tom Hardy). This boy was fine. And the generosity of this boy in bed was crazy. He went down on me within three minutes of kissing. I even said let me have a shower and he was like, “I don’t care”. I was gobsmacked and not just from the size of his dick. This dude was amazing. So, did I sink him you may ask? Well no. We became official as in agreed to not date others. Now this is the funniest but also the saddest thing you will hear. The day after we became official this dude told me his ex-girlfriend who cheated on him was pregnant with his child. I remember I called my mum and sister and they just laughed because who could pick that. So obviously I ended that one. Obviously wish this dude all the best and he’d make an amazing father. But yea that one fucked with me.

So next let’s talk about Mr Shredded. Now Mr Shredded was from Auckland. Now Mr Shredded and I had been talking for bit as well. He decided to fly down for the weekend. It was super nice. We spent the night at a hotel and then mine because I had to make sure he wasn’t a psycho before he met my flatmates because my flatmates are my whanau and I love them enough to not let a fuckhead stay in the house. So, we had a whirlwind of a romantic weekend. I dropped him off at the airport on Sunday and honestly, I had a great time, but he was going overseas for six weeks and it would not work at that time. However, funny story, Mr Shredded is staying at mine tonight because we kept in contact and he’s moved down to Wellington. Do I think anything will happen? Probably not. I just feel like cuddles in bed. I had a super intense orgasm the other night so I’m not really craving the dick tonight.

Alright now Richard. Richard randomly added me on Instagram and we got chatting. We dated for three weeks. He would swear that I was the only woman he was dating. Long story short we were out in town one night and I saw him smacking another woman’s ass. I asked her if she was dating him. What did she say? She said she had been dating him for three weeks. I’m sorry but what?! She slapped him, he yelled at her, punched a bus stop and sat there saying I was lying and dating his best mate instead. Bro, fuck off with your shit I mean what I got to gain about lying about a selfish prick in bed like you? Anyway, I obviously told him to get fucked however the other woman stayed with him. Her reason you ask? Quote on quote, “I mean I’m young”. Yip. See I walked away because I know my worth and I don’t fuck with a liar. Lie to me once and you are cut.

So, can it get worst you may ask? Let’s find out. Which brings me to my last two bachelors of the year.

Next up is Zaddy. Now Zaddy was rich as fuck I’m talking Cartier bracelet, Gucci, designer brands to the max. You’re all going to laugh at this story though. So Zaddy wouldn’t let me buy anything. I brought him hot chocolate once and he was not happy. He wouldn’t even let me put rubbish in the bin. Now on the second date we were in his car. He hopped on top and babes no other way to say it then be straight up. Zaddy was dry humping me and well Zaddy came in his pants. No lie just plain and simple came in his pants (quickly as well). You know what I didn’t care? I mean if I can make you cum without even touching your dick that’s impressive. He moved up north after this. Three days after that he messaged me saying he loved me. I’m not even making this up. Told me he loved me and wanted to try distance. So, he flew down to Wellington. We were at my house and we were kissing then he got super worked up and then stopped. He then left. Why you ask? Because he still can’t get over his ex-girlfriend. Cool bro but you would of known that from the first date…

Next is Sam. Sam and I went on two dates and I’m gonna be honest after previous dates I just hadn’t been in the right frame of mind. After the second date I knew that I couldn’t date anyone plus I was just comparing him to Zaddy the whole time. Like I just had this feeling. Like I’m not feeling that great at the moment mentally. In all honest I’ve been having a pretty shit time within myself. Don’t get me wrong I love myself and know I’m amazing in every aspect, but I’ll just be honest I have been going through a fair bit of anxiety and depression over the last few months and it all just came to a head recently which is not normal for me. So, I knew I had to just focus on me. So, I told him and never heard back.

And, my conclusion on this year’s dating fiasco? Honestly, it’s been shit. I’ve learnt a lot about myself. Do I regret any of them? Not a chance. I believe everything happens for a reason. Even if at the time we don’t get why, eventually you will understand. But I do want to point out throughout this whole year of dating I have had many offers for dates and I’ve actually turned down over half of them. Because I ain’t desperate. I think about who I date and don’t just go after any dude who comes at me. Do I recommend online dating? Yes!  It’s amazing but also extremely shit. But that’s like anything. Some men are gonna be amazing at going down on you and some are gonna think your pussy is a coin slot for their tongue... Lastly, ladies, if your man is selfish in bed call that mofo up. This ain’t a one way street. We give head to get head... Equality my bro. You can’t be great in bed if your only skill is going up and down.

Am I dating now? I don’t know old mate Mr Shredded is staying tonight but at this point in time I’m not looking for anyone. It’s funny because from dating Zaddy, I kind of know what I want in a man. I don’t want a man that’s going to pay for everything. But I want one that wants to try and make a good impression. I mean I literally got a message from someone new today as they added me on Facebook. I asked why they added me and they said, “your pretty”. I mean moisten my pussy and fuck me already. Like seriously do you think that’s all you have to do? Boys let me make this clear. You are never the only man pursuing us. There are always multiple others fighting for our attention so be different, be respectful, be kind, be truthful and for fucks sake don’t be a fuck boy or if you are be up front about it! The moment you realise we aren’t the one, say something. Don’t be disrespectful and lead us on. We won’t be mad if your honest from the get go. Be truthful when you talk about yourself. I mean hey I ain't out here saying I am a size 6 who loves to run. Because babe I only run for dick and food and even then, the dick has to be pretty great.

Now for my sisters and brother on the quest for their forever dick and vagina. Don’t lose hope because if I haven’t after this year’s fuckery then neither should you. Don’t settle for just anyone. Find someone who brings you up and thinks you are amazing and worships you like the queen or king that you are. Also remember you need to love yourself before you can allow someone into your life to love you! And lastly, if you wanna suck 10 dicks a night go hard, if you wanna stay a virgin till you meet the ‘one’ do it. Live your life how you want, don’t get caught up in the fuckery of dating in society norms. If your safe, happy and not hurting anyone, do whatever the fuck you want.

To keep up to date on my life head to www.theunlonelywoman.com